The mortar joints in brickwork have a significant influence on the overall appearance.

Mortar joints have a marked effect on the appearance of brickwork. They account for a surprisingly large proportion of its surface area – slightly more than 17% in stretcher bonded work. The colour and texture of the mortar and the joint profile are all important factors. A variety of joint profiles are used. Some reveal the edges of the bricks and so accentuate their individual forms, others obscure the edges and merge bricks and mortar to a homogeneous surface.

The most popular joint profiles are: ‘flush’, ‘bucket handle’, ‘weather struck’, and ‘recessed’ or ‘raked’. These can be formed as ‘jointing’, that is, completed as the brickwork is laid, or as ‘brick pointing’ – with the joints left recessed to receive the later addition of mortar in which the joint profile is formed. Some other profiles, for example ‘weather struck and cut’, are only practicable as pointing.

As bricks are laid, mortar is squeezed from the bed joint. When the brick is properly set in position excess mortar is skimmed off at the surface. To do this a trowel is held at an angle to the wall surface with the edge under the projecting mortar; it is then run forward along the line of the bed joint to cut off the excess. The trowel should not be scraped up or down the face of the brickwork because that will smear mortar onto it. Any cavities in cross joints (vertical joints) should be made good and excess mortar cut off flush to match the bed joints. For a ‘flush’ joint profile no further working need be done. Because flush joints are formed without compacting the surface of the mortar they are less resistant to water penetration than profiles formed by tooling. For other joint profiles the mortar is left to stiffen slightly and then tooled. The time taken for the mortar to reach the correct consistency varies considerably and checking should start after approximately 10 minutes. It must be stiff enough not to flow or adhere to tools, but not so stiff that it crumbles and breaks away when tools are applied.

Flush joints are formed without compacting the mortar surface, so are less resistant to water penetration. A ‘bucket handle’ joint is formed with a jointer that is half round or circular in section. The tool is pulled along the joint in contact with the edges of the bricks on either side. Cross joints are finished first, then the bed joints. The diameter of the tool determines the depth of the curved recess – a small diameter of 12mm produces a strongly curved deep profile while one of 25mm produces a shallow curve only about 2mm deep. Purpose-made metal jointing tools are available, but off-cuts of metal or rubber tubing are frequently used. Metal and plastic tend to polish the surface of joints and this can produce a harsh character. Off-cuts of hard rubber hose (such as those used in car engines) compact the mortar surface, but roughen it slightly to leave an attractive sandy texture. Timber dowelling produces a similar texture, but is best avoided as it wears quickly and so leads to inconsistency. Whatever tool is chosen, its use should be consistent throughout the work.

Shallow bucket handle joints and mortar to match the bricks emphasise the plain surface of the brickwork. ‘Weather struck’ joints are formed with trowels. The inset edge of the joint should not be exaggerated, about 2mm is enough – the thickness of a trowel blade is a guide. The forward edge should finish on the edge of the brick. Cross joints are formed first. A small pointing trowel is held with its edge pressed into the mortar against one brick and drawn across the joint against the other. A right-handed bricklayer tends to form the inset on the left side and draw to the right. Either direction is acceptable, but make sure that it is the same throughout the work; otherwise the brickwork will look patchy. Bed joints are formed with the straight edge of a normal trowel pressed into the mortar against the upper brick and, while holding it against the edge of the lower brick, pushing it along and down. The straight sloping surfaces of the bed joints tend to catch the light and accentuate them. This joint can give the work a neat, well-ordered appearance and looks best with well-formed regular bricks.

Weather-struck joints can give the work a well-ordered appearance. 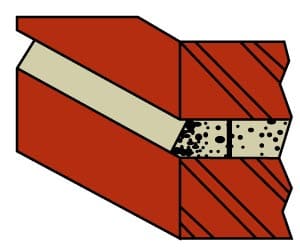 ‘Weather struck and cut’ joints are formed as pointing. The inset edge is produced as it is with ‘weather struck’, but the forward edge is projected about 2mm beyond the brick surface. For the cross joints the projection is cut vertical and straight using the edge of a pointing trowel. For the bed joints the projection is cut using a straightedge and a ‘Frenchman’, a knife with a specially shaped blade. The straightedge has blocks to hold it off the wall surface to avoid smearing and so that the mortar cut off can fall down and away. This profile also accentuates the bed joints and looks well with well-formed regular bricks. If used with irregular bricks, inevitable variations in the width of the joints tend to produce a heavy, somewhat coarse appearance. ‘Recessed’ joints are raked out to a consistent depth. A wheeled jointer is an effective tool for this. The raked profile can be left as roughened texture, but it is better to compact the surface of the mortar to improve its resistance to rain penetration. A square-edged jointer or a slipper iron in a wheeled jointing tool can be used. A recess of about 5mm produces a good visual effect; exaggerated recessing of 10mm or more should be avoided. Recessed joints impede the flow of rainwater down the surface of the brickwork, which tends to get wetter than it does with other profiles. For this reason recessed joints are not recommended unless the bricks are eminently frost-resistant, that is, conforming to durability designation F2 in BS EN 771-1 Specification for Clay Masonry Units. They are not recommended in locations liable to severe exposure to wind-driven rain for brickwork in which resistance to water penetration is important.

Using the same bricks as for the bucket handle joint, recessed joints and contrasting mortar dramatically change the brickwork’s appearance

A modern development in brickwork is the use of proprietary thin-joint adhesive mortars. They are not applied with a trowel. The mortar is pumped, via a hose, to a handheld applicator designed for accurately placing a controlled quantity of mortar along a bed joint and on the ends of bricks about to be laid. The bricklayer places the bricks and the mortar squeezes to within 5-10mm of the face of the work. Typically the joint width is about 5mm. It can be left without further manipulation, but a narrow square-edged jointer is sometimes used to firm the mortar within its recess. The joint profiles described above are not applicable to such thin joints. The joints comprise only about 9% of the surface area of brickwork and their effect on its appearance is greatly reduced. However, the technique is particularly appropriate to well-formed regular bricks. The thin joints enhance the precise character of this type of masonry.